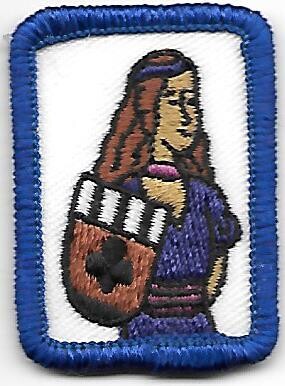 Purpose: The Middle Ages was the era of knights, fair ladies, princesses and castles. Learn about medieval times beyond the tales of adventure and make-believe and find out about the lives of girls and women during a time of hardship and endurance.

To earn this interest project patch, complete at least seven activities as follows: Two Skill Builders, one Technology, one Service Project, one Career Exploration and two activities from any category you choose.

1. Timeline: The medieval times are also referred to as the Middle Ages. Find out where this time falls in history and what the three smaller periods within the Middle Ages are called. Create a timeline of some of the more important things in history that occurred during these times.

3. Famous Women: Joan of Arc is just one famous woman of the Middle Ages. Who were some other famous medieval women? Find out about the lives and contributions of Joan of Arc and at least two other women of the times.

4. Coats of Arms: What is heraldry? Find out why a knight would use a coat of arms to identify himself in battle. Find out what the different parts of a coat of arms are called and research their symbolism. How would a coat of arms change once a person married? Design one for you or your family.

5. Castles: The castle was the centerpiece of medieval society. Find out how they were constructed, who lived in them and what their purpose was. Learn about some of the characteristics of medieval architecture. Design your own castle, either by drawing or using other materials to create a model.

6. Fabrics and Fashion: Women’s fashion during medieval times varied depending on what class they were born into. Compare the clothing of peasant women to that of nobles. See how fashion changed throughout the time period. What fabrics were available? What kinds of dyes did they use? Make an article of medieval-styled clothing or an accessory such as a hat, pouch, veil, or piece of jewelry.

7. Museum Visit: Take a guided tour of a medieval museum such as Higgins Armory in Worcester, Mass. or Hammond Castle in Gloucester to learn even more about the Middle Ages. Prepare questions in advance to learn as much as you can during your visit. In addition to the tour, find out about the history of the museum itself, how the museum items are cared for and stored and where they are obtained.

1. Cookery: Find out what kinds of food people ate during medieval times and what ingredients were available to them. What were some of the problems people encountered that affected the way they ate? How have technological advancements changed to help in this area (ex: shipping, refrigeration)? Find a recipe written during medieval times and see if you can translate it to modern day language. Here is a good place to start: www.godecookery.com/mtrans/mtrans.htm With your troop or group, or on your own, prepare some different medieval recipes to sample (feel free to use modern adaptations).

2. Books: Even the simplest books were very expensive in medieval Europe, so there weren’t very many of them. Sometimes library books were even chained to the tables so people couldn’t steal them. Find out why books were so valuable. How were they made? What materials went into making them? Some were made even more special with ornately carved covers encrusted with jewels and ivory. Look at some photos of books made in the medieval times and try making your own version using materials of today.

3. Armor: People who were involved in combat would have worn mail and armor. Find out about the different types of armor that were worn and what types of weapons were used during the Middle Ages. What kind of technology went into crafting armor and weapons of the time?

4. Art: Research some of the different types of art produced in the Middle Ages during two different periods (such as Byzantine, Romanesque and Gothic). Compare the different styles. Try reproducing a piece of your own in the same style of the sculptures, paintings, mosaics or stained glass that was produced at the time. 5. Inventions: Medieval Europe saw many new inventions and the adoption of new technologies. Most inventions, however, were actually invented by workers/smiths as opposed to scientists. Find out about two and what impact they had on the development of the time.

1. Share: Visit a younger troop or group and share with them what you’ve learned about medieval times by hosting a party where they can enjoy the fun of a Medieval Faire.

2. Display: Develop a display about medieval women for your local library or school. Present the information to a younger group in a fun and interactive way.

3. Create and share: Create hands-on activity sheets which younger girls can use to learn more about girls and women in medieval times. Share your sheets with a younger troop to help them earn their Medieval Maidens age-level award.

4. Volunteer: Volunteer at a Medieval Faire or Festival to help attendees learn more about women of the Middle Ages. Or attend another public type event where you could host your own information table or entertain as a troubadour, jester, minstrel, mime or other medieval entertainer.

1. Museum Docent: Interview a docent or other educator who works in a medieval museum, such as Higgins Armory in Worcester, Mass, Hammond Castle in Gloucester, or another historical museum. Find out what training and education is required to perform their job.

2. Educator: Interview a person who works in a career centered on women’s history or medieval history, such as a librarian, interpreter, teacher or other educator. Prepare your questions in advance and be sure to ask about education and training, why they chose this field, and about other related careers.

3. Courses: Research different college courses centered on women’s history or the Middle Ages and what career options they might lead to. Find out more about these careers such as work settings, education required, salary range, etc.

4. Interview: The performing company members at Medieval Fairs (also known as the "cast") dance, sing and entertain the fair-goers in many ways. There are also many support characters; even the vendors dress up and act their parts. Interview a cast member, vendor, or other fair worker and find out what their life is like traveling from fair to fair. What kind of salary and benefits do they receive for their work? How much traveling is involved? What is it about their work that keeps them going? (Cast members at fairs usually don’t drop their character while performing, so it’d be a good idea to set up your interview in advance).

5. Interpreter: Medieval fairs and festivals are just one type of opportunity for historical interpreters. Find out what kind of training, research and preparation goes into becoming an interpreter at a living history museum such as Sturbridge Village or Plymouth Plantation.