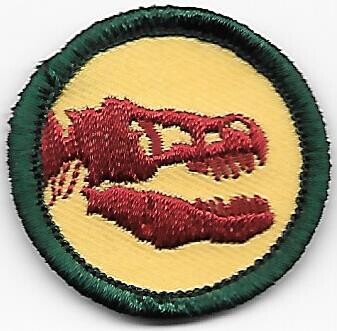 Paleontology: Can you dig it? Paleontology is the study of fossils. A fossil is any part of a past life form. Most fossils that paleontologists study are several thousands to one-half a billion years old. Paleontologists study fossils to study past life on Earth. Paleontology differs from archaeology and anthropology in that paleontologists study life, from bacteria to whales. Archaeologists work with human artifacts and human remains. Anthropologists work with human cultures, societies, languages and ways of life. Knowledge of the past and earth’s history can provide scientific approaches to future issues that affect life on Earth. You must complete seven requirements to complete this badge, including the three starred (*) requirements. *1. Research the training needed to become a paleontologist. Is a college education required? Name specific skills or talents that are helpful in paleontology. Find out what kinds of jobs paleontologists might hold – and describe the work environment of one of those jobs. 2. Most dinosaur fossils form when animals are buried quickly after their death and sediment covers their remains. The animal parts that do not rot are encased in sediment and with the right circumstances turn into fossils. The chemicals in the buried animals’ bodies undergo changes; the soft parts decay and minerals seep into them, replacing the chemicals in the bone with rock-forming minerals. A dinosaur fossil has the same shape as the original object. Trace fossils are indicators of fossil life, like nests, footprints and skin. Have dinosaur fossils been found in your area? Were the fossils in your area body part fossils or trace fossils? Call your state geological survey to find out more about dinosaur fossils in your area. 3. A young girl is credited with finding some of the first dinosaur bones in approximately 1810. Another woman discovered the most complete T.Rex fossil ever in 1990. Name these two women. What kind of training or education did each woman have? Research a woman paleontologist with formal training. Good websites are: www.awg.org (This is the website of the Association for Women Geoscientists.) www.projectexploration.org

4. Make your own fossils using chicken bones. Try to use a whole chicken for this activity-if you use a whole chicken you will be able to see all the bones. After cooking the chicken and eating the parts your family enjoys, remove the remaining meat from the bones by placing the chicken in a metal pan, covering it with water and boiling it. Boil for 30-45 minutes until the meat comes off the bones easily. Rinse the bones and run them through the dishwasher, or boil them for one hour in dishwashing liquid and water. To further age the bones bake them in the oven for about one hour at 350 degrees. When the bones are cool, break some of them into pieces. The next step in “fossilizing” your bones is to put them into a soil “site” for later excavation.

6. Excavate and map your fossils. Draw a map of your excavation container. If you use a shoe box, draw a rectangular map. As you search for your fossil bones, you will need to draw where each bone is on your map (it may be helpful to divide your map into four or more parts). As you find bones, record their exact location on your map by drawing and numbering each bone. Then, be sure to label a small piece of paper with the specimen number and lay the “fossil” on the numbered paper. If you divided your container into sections, you will need to label your fossils with a section and a number (see example). As you label and number each fossil, record your observations about each fossil: its shape, size, possible part of the body, etc. Example:

7. Once you have excavated fossils, labeled and numbered them, it is time to clean them! Fossil preparators are people trained to clean fossils to get them ready for display and research. Use your excavated fossils and the following tools: tiny brushes, dental tools, toothpicks and a magnifying glass; remove the “matrix” or accumulated soil, sand and plaster of paris from your fossils. You will need to figure out which tools to use on each fossil. Be careful not to break the fragile bones. Experiment and have fun!

8. After fossils are prepared, scientists often make molds and casts of the bones. You can make a mold and cast of your fossils by pressing the fossil in clay, play-dough or other soft substance. To make a cast of the fossil you will need to fill the mold with plaster of paris. When the plaster of paris dries, you will have a cast of your fossil. Scientists use casts to help study fossils and to “share” fossils with other people. Casts of fossils can be moved without destroying precious fossil bones.

9. Imagine you are participating in a dig for dinosaur bones and you write a letter home. What would you tell your family about your experience? How is the weather? What do you eat? What clothing do you need to wear? What kinds of tools do you use? What part of the world are you in?

10. Dinosaurs ate plants (herbivores), meat (carnivores), or both (omnivores). Many dinosaurs stalked and killed their meals (predators). Some dinosaurs fed on animals already dead (scavengers). Pick a particular dinosaur and answer the following questions about it: • Was it a carnivore, herbivore or omnivore? • Was it a predator or scavenger? • Did it travel or live in herds? • Where are this dinosaur’s fossils likely to be found?

11. Scientists believe dinosaurs were close relatives of birds and crocodiles because of similarities in their anatomy. Dinosaurs also share many bones with humans. Using a dinosaur skeleton drawing and your knowledge of human bones, list three bones that dinosaurs and humans have in common.

*13.Visit a museum near you that has dinosaur fossils on display. If you can’t find a museum to visit in person, visit one on-line. Websites to try: www.fmnh.org/sue Field Museum of Natural History www.tyrrellmuseum.com The Royal Tyrrell Museum www.ucmp.berkeley.edu The University of California, Berkeley, Museum of Paleontology www.projectexploration.org Project Exploration,Chicago www.clpgh.org/cmnh/discovery The Carnegie Museum of Natural History Resources There are many websites and books with information on paleontology and dinosaur fossils. In addition to the websites listed in requirement 13, try these sites: www.enchantedlearning.com/subjects/dinosaurs (Zoom Dinosaurs.com) www.abcnews.go.com/sections/science/dinosaurs www.bbc.co.uk/dinosaurs